A step into the surreal and reviving the forgotten.

I was pottering around the other day on a rare occasion of having a bit of time to hand, oh how I love that feeling and having the time to think and let the mind wonder. I had caught up on all my jobs and had spent a couple of days creating a photo book of Barcelona, which I had thoroughly enjoyed doing and I wasn't back to my other job until later in the week. With this time I began to think about some of the work I had started or maybe re-developing some other ideas when I remembered about a piece of forgotten embroidery I'd started way back in Feb/March last year.

I had torn an image out of a magazine that documented the demise of an old building in America. It had caught my eye because of the colours within the image and also the way it had deteriorated. I did a drawing and used mixed media to get across the textures within the image and had thought there was more to be done with it. So I had started this embroidery. However as with some things it got put aside, partly because I'd got stuck on an element and partly because other work called. It then languished in my sewing cupboard for months, until this free day I had.

The images below show what I managed to do in the process of a day and a bit. I had discovered a technique through a friend and I had been wanting to use it on a project and why I had not thought of this particular piece at the time I do not know. Anyway thanks to that I've now filled in the main image and now need to embellish it's surroundings so it's not floating on the cloth alone. 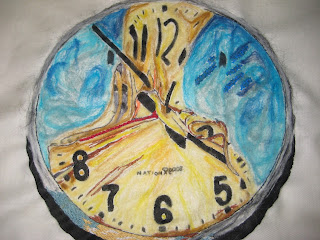 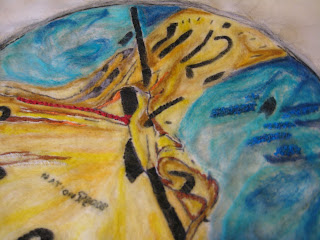 Copyright Ballistic Owl 2013
Perhaps as well I'd been inspired and reminded of it by our recent visit to Dali's Museum in Figueres. These images are from the museum and show Dali's most popular surrealist style of morphed images and distorted objects. Perhaps in my subconscious my clock was sitting and just waiting for the right sort of inspiration to revive it. 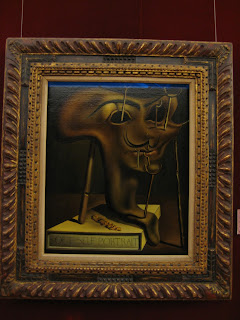 Dali: self portrait with grilled bacon. 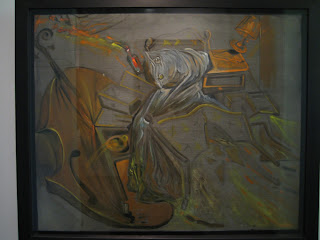 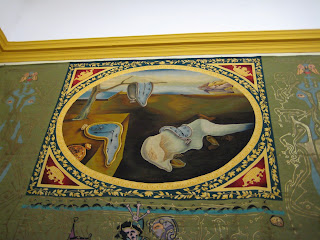 I loved our time at the museum and discovered that Dali did so much more than just the famous clocks and alien creatures. He also painted in a more classical style and enjoyed optical illusion imagery which makes the viewer stop a while to discover more.

Well I'm not promising optical illusions, but I will work into my clock piece more and enjoy a taste of the surreal world.