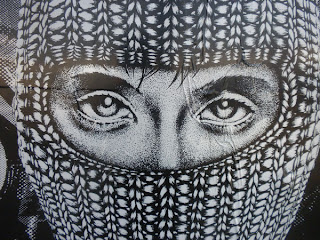 As I've made my way around Newcastle I've come across some interesting urban artwork. It is often on a massive scale and something that sticks in your head. Like the eyes that look out from the balaclava, they have that spooky, haunted look that follow you everywhere. Until now I've not known who's produced these thought provoking works. Then while searching for inspiration on the web I found Prefab77, a collective of North East artists who produce cutting edge artwork often with a political feel, but as they say "always beautiful".

Their work if often on the sides of buildings often on ones around the Byker farm area where aged walls lend added texture and depth to the detailed work of Prefab77. I love the scale and the detail in these images and that they often bring life to blank space. Their take on the Queens portrait is for the Jubilee, I've not seen this yet, maybe I should take a trip round Byker and Newcastle and see if I spot her and her cheeky wink!