Should really be doing housework! 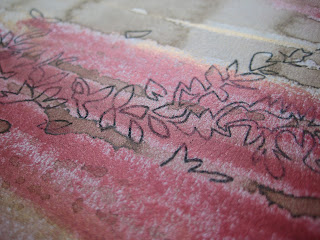 Part of today was set aside to do housework, but so far not a cloth or hoover has been picked up or pushed round oopps! The reason for this is an old printing block I inherited, that has been whispering quietly to me for months now.

I've been wanting to build it into a design of some description as it's so beautiful and if it could really talk it would tell us some interesting stories. So I've been experimenting with it and how to translate the partial design. I tried mono printing, that didn't work but it maybe something to keep trying. I tried a rubbing, but not quite the effect I want. I would splurge some dye on a pad and dip into that as it would have been used in the old days, but I like the patina on it now and don't want to ruin it. Anyway played around and I now have it on the paper surface I prepared. I'm going to repeat certain parts of it and draw and paint building up layers and images. I'll let it develop organically and hopefully something beautiful will appear.
Posted by Tracy at 10:39